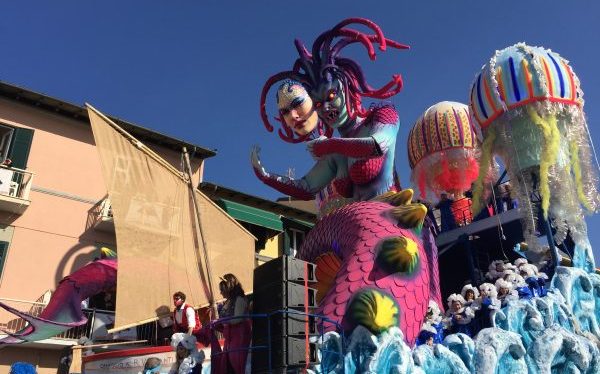 It just so happened that we’re in Italy for one of the biggest Festival experiences in Italy. Carnavale Viareggio is second only to the Carnavale in Venice, and it just happens to be only a half hour from where we are. On Sunday, our day off at the studio, we decided to join the crowds. The guidebooks call it a “once in a lifetime must- see” and they were right.

We parked far away and had a lovely walk along the seaside boulevard, which was very Malibu-y. Many places aren’t open and the beach isn’t wall to wall people like it is in the summer. We started to see folks dressed up and since it was mid-afternoon there were lots of families and kids. All the kids had bags of paper confetti to throw and they did enjoy that. I’ve got some still in my shoes, bed and floor.

We bought our tickets and joined the party inside the gates. They have the entire boulevard blocked off to control entry for 2 km long circuit. Each direction is two lanes wide and the floats start moving and go in a large circle. You start seeing these giant floats from far away but you cannot see the entire length of the parade. The largest ones fill the whole street, almost close enough to touch people standing on their balconies three stories up. The floats are made of paper-mache, as they have been since they started way back 140+ years ago. I’m sure they have some rain proofing material on the outside as they seem to be quite permanent, not like the paper-mache I made in grade school.

The large floats are animated, some have multiple characters moving in multiple dimensions, it’s an engineering marvel under it all I’m sure. Some are pulled by tractors, others must have some device driving it from the interior, many are pulling large industrial-sized generators to power the lights and who knows what else. There are folks pulling levers and spinning wheels to move certain parts, and they’re doing this for at least 3 hours, impressive! There are dancers on the floats and also lines of dancers in front of the floats, some had some intricate choreography. After 2 hours we started seeing a lot of folks in these costumes at the concession stand or having a cigarette, I think dancing on the floats is more fun the first half hour.

The artistry of the floats were amazing, there were some that seemed to be alive, and many had an emotional impact like the whale covered in plastic with oil refineries growing from its back, and a tear coming from its eye. I encourage you to look up some YouTube video of the Carnavale Viareggio 2019, their videos are better than mine and seeing them move is amazing.

They encourage everyone to participate in the parade, no sitting on the curb. Well you can but everyone else is walking around you so you don’t see much this way. You can get right in the street in front of the float (as long as you move out of the way to not get run over).

So many of the attendees were in costumes, like Halloween. It was great to be able to get up and walk around and follow a float or cross to the other side of the street when you wanted.

Some of the floats were tributes, like the Frida Kahlo, many had to do with the key issues of our times: the environment, bullying, and of course, politics. There were two large-sized Trump floats (and I think a few small ones), one depicting him as “God Emperor Trump,” which was not meant to be complimentary although I understand that some of his fans think it was. The other one was Trump as a baby swimming amongst toys. It doesn’t seem that Italians are fans, another reason to love Italy.

This experience was an amazing “extra” for us. There was so much to see, I’ve added a lot more photos to the end of this blog. It has taken me a few days to get this posted, our wifi here isn’t very robust but I’m grateful we have it. I’m going to publish this while it’s still daytime for you all, it’s still odd being a half a day ahead of you all! Everything at the studio is going great, more tales coming of stone, tools and sculpting…

7 thoughts on “Sunday is our day off” 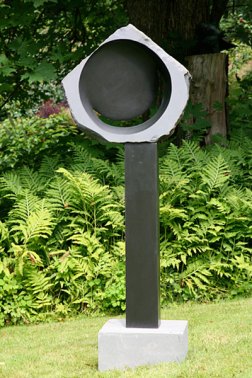 Living with My History – sold 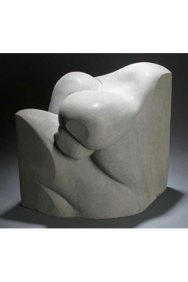 Man in a Box – Tenino sandstone-SOLD

Waves at Night, basalt on limestone-SOLD 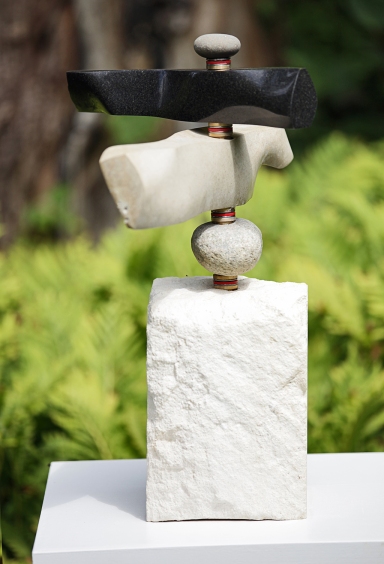 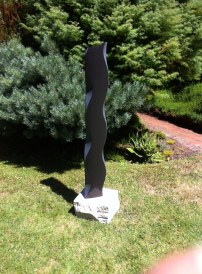 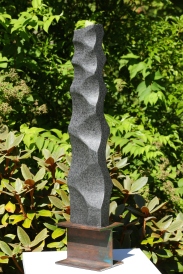 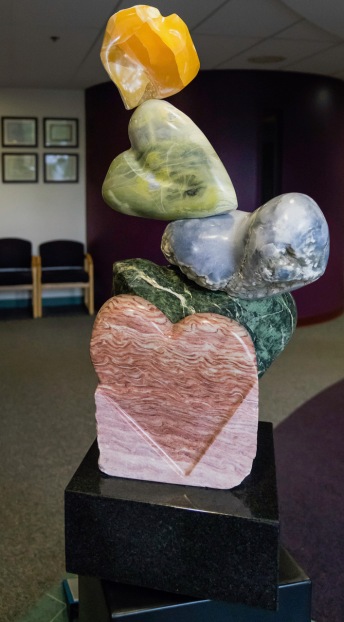 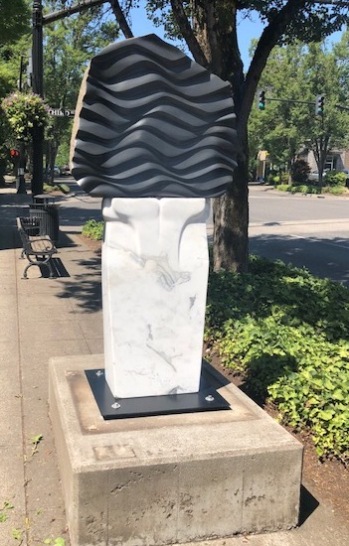